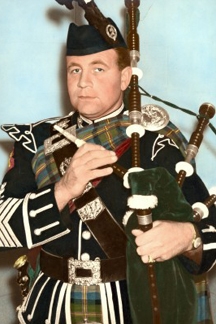 View this article as it appeared in the spring, 2016 EUSPBA Voice

As with many cities in the United States and Canada, Cleveland’s bagpipe community was influenced by Scottish immigrants who came here to start a new life, but also worked to keep alive the traditions of Scotland. One of the most influential was Sandy Hain. Sandy is very well known in this region but less known in the greater areas of the Eastern United States Pipe Band Association and the United States in general. This is due, in part, to him never having a particular interest in judging or becoming involved with pipe band associations. His passion is teaching and the preservation of Scottish culture. As you will read in this article, he has had a significant influence on piping in the Ohio Valley region and beyond for over fifty years the effects of which will be felt for many years to come. 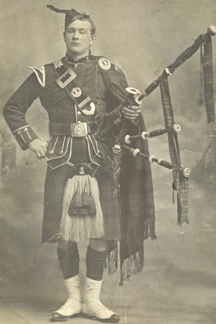 Born September 27, 1928 in Leslie, Fife, Scotland, Sandy is the eldest of nine children. His interest in bagpipes started at the age of four after seeing a picture of his father in the paper playing the bagpipes. Sandy’s father was a piper in the Black Watch during WWI. Sandy’s grandfather was also a piper. (As an aside, Sandy’s father also founded the Cupar and District Pipe Band. His Brother, Robert, was also a piper in the 1st Battalion Black Watch and his sister Jean was Pipe Major of the World Champion Lochgelly Ladies Pipe Band).

Sandy enlisted in 1946 at the age of seventeen as a “five and seven” which meant he would be enlisted as regular army for five years with an additional seven in reserves. His first assignment was with the 1st Battalion Black watch under Pipe Major James Jenkinson. During this period, the band was stationed in Germany. This included a rotation at Spandau Prison, named after the borough where it was situated, guarding Rudolph Hess, considered the number three man in Hitler’s Third Reich. 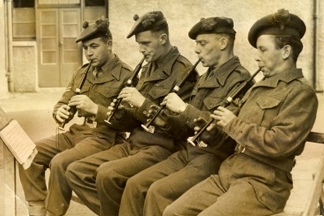 (Sandy Hain practicing with Black Watch. Sandy is seated 1st on the left)

The band performed at numerous folk festivals in France and Switzerland. Among the notable members of the band at this time was George Lumsden who later became Pipe Major of the Edinburgh City Police Pipe Band and Jim Greig, who went on to play with the Edinburgh City Police Pipe Band then later immigrate to Canada and became Pipe Major of the famed Clan MacFarlane Pipe Band from St Catherine’s, Ontario. In addition to being a piper, Sandy was also in charge of the dancing team. Sandy tells a great story where Jim Greig was dancing on a raised stage where the people in the rows next to the stage would soon realize that Scots don’t wear anything under their kilt or, as Sandy tells it, “He gave the lassies a thrill!” 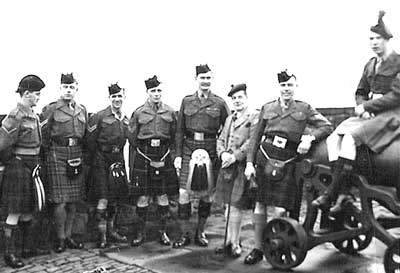 In 1950, Sandy was selected for the Pipe Majors Course at Edinburgh Castle where his instructor was Pipe Major Willie Ross. As Sandy tells it, “It was the proudest day of my father’s life” when he was accepted to take “The Course”. In 1952 he was appointed Pipe Major of the Depot Black Watch and later the 2nd Battalion Black Watch. Much of this time, the band was stationed in Georgetown, British Guyana.

In 1957, the 1st and 2nd Black Watch Battalions were merged and were stationed at the Redford Barracks, Edinburgh. At the time, most did not realize the significance of the merger but it was, as Sandy tells it, the first of many downsizing moves of highland regiments. Because of longer service time, John MacNichol became Pipe Major of the merged unit and Sandy became its Pipe Sergeant. The band combined band performed at Edinburgh Castle for the Royal Edinburgh Military Tattoo, the Royal Tournament in London and the United States and Canada. 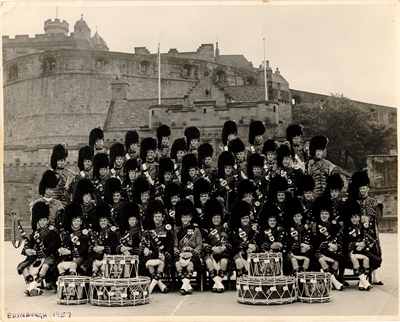 In 1958, Sandy decided it was time to move back to civilian life. He did have opportunities to stay in the British Army as there were Pipe Major openings with the Royal Scots and Dragoon Guards but, that would require him to reenlist for another ten years. So, in April 1958, Sandy was given the UK version of an Honorable Discharge, called being “Demobbed”, and sailed from Liverpool to New York City. 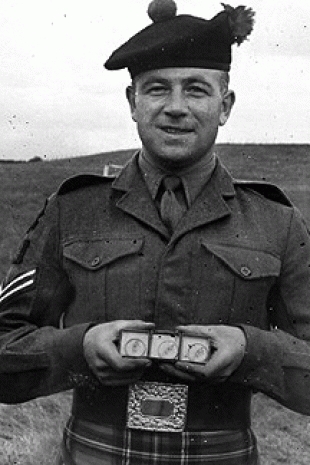 Upon arrival, Bob Callander stepped down as Pipe Major of the Cleveland Kiltie Band and Sandy was appointed to that position. At first, the adjustment to running a civilian band with no ex-military in the ranks didn’t go as smoothly as planned as, in only a few months, Sandy lost the vote to retain his leadership role. In fact, Sandy explains he only received two votes with one of them being his own! However, only a few months later, he was again appointed Pipe Major which was a position he held for 26 years.

The Cleveland Kiltie Band was an extension of the Masonic groups in Cleveland. As a result, the band did not permit those of Roman Catholic faith to be members. Sandy was not in favor of this policy and overcame it in a way he describes as “back door”. Sandy had a student he brought down to the band and everyone assumed, because Sandy sponsored him, that he was a Mason. Sandy’s student became a member of the band and, over a period of time, people discovered he was Catholic but, he was so well liked, no one thought to remove him. The band realized that it was music that brought them together and religion soon became a non-factor as far as band membership. 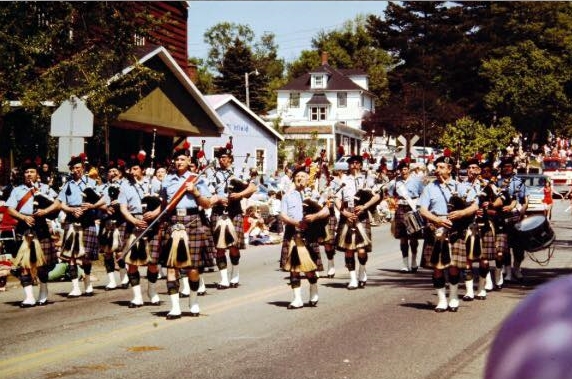 During this period, Sandy competed at a number of Highland Games including new competitions held in Ligonier and Grandfather Mountain as well as competed at more established competitions in Canada such as the Hamilton Games. Sandy also began teaching which was his true passion especially piobaireachd which is his favorite music to both play and teach. His school was called the Red Hackle School of Piping and was registered with the College of Piping under Seamus MacNeil. Here, Sandy was approved to administer level tests on behalf of the College of Piping.

During the day, Sandy worked as a Superintendent at the Brooklyn Hts Cemetary which was a job supplied by Bob Donaldson, one of his original sponsors. Sandy quickly saw other opportunities, though. At the time, it was difficult to get bagpipe supplies as there were no local bagpipe and pipe band product retailers. Sandy began selling bagpipe products and, later Scottish jewelry, while working with John Kirkwood from St Catherine’s, Ontario. John was a drummer in the Argyll and Sutherland Highlanders and immigrated to Canada and became the Lead Drummer of the Clan MacFarlane Pipe Band.

Sandy would sell bagpipe products and Scottish jewelry at the various Scottish events including “White Heather” concerts who brought in entertainers such as Andy Stewart. At one of these events, Sandy met George Hudson who had been a member of the Black Watch and immigrated to Chicago. George set up a Scottish bakery called Gaelic Imports which sold mostly meat pies and other Scottish baked goods. Sandy and George partnered with a shop in Cleveland and one in Chicago selling Scottish baked goods through George and bagpipe supplies through Sandy’s contacts. In 1965, Sandy opened Gaelic Imports at W 25th and Denison Ave in Cleveland where it remained for many years. In addition to bagpipes, Sandy is also an accomplished accordion player. In 1966, he started “Sandy Hain and The Clansmen” which was a Scottish dance band. This dance group became a staple in the Scottish community of Cleveland and played at every conceivable event you can imagine for 42 years.

During the late 1960’s, 1970’s and early 1980’s, Cleveland had a vibrant Scottish Community with many first and second generation Scottish and Irish taking up the instrument and many groups holding events with dancing to Sandy Hain and the Clansmen.

Sandy always encouraged those wanting to play at higher levels to do so. In 1975, a small group of players from the Cleveland Kiltie Band wanted to compete. Under the direction of Tom Hastings, this group, combined with a few members from the rival Cleveland Caledonian Pipe Band, formed the Western Reserve Pipe Band which later came under the leadership of Noel Slagle. Too often, in modern times, bands who teach younger players try and prevent them from moving on to higher levels. This was not the case in Cleveland as it was a matter of pride, to both the teachers and members of both the Cleveland Kiltie and Caledonian Pipe Bands, to have players go on to play with the Western Reserve. Much of this was due to Sandy’s influence.

Interest in bagpipes increased in this period. To have more time to teach, Sandy sold Gaelic Imports and devoted more time to teaching. He also had the opportunity to refine his reed making abilities. Sandy was first educated on reed making from Frank Bain, father of Allister Bain, as students at the Pipe Major’s Course all went to his shop for their personal reeds. Reeds for those in the Pipe Majors Course were supplied reeds by Willie MacCrustie, an ex-Cameron Highlander. However, for personal playing, they went to Bain for reeds. Sandy learned further from Noel Slagle who had learned the art from Tom MacAllister. Sandy’s reed making business “took off” and his days were filled with piping instruction and reed making. Over the years, he has consulted with a number of reed makers sharing his process and improving his own. Some of the notable modern day reed makers such as Adrian Melvin and Shawn Husk have exchanged ideas with him.

Sandy Hain suffers from Focal Dystonia which is a repetitive nerve disorder. In pipers, it effects hand control. Due to this, Sandy stepped down from the Cleveland Kiltie Band after 26 years of service.

Sandy visited a number of doctors regarding his hands and made other modifications so he could continue playing. In 1987, he was asked to help the start-up Greater Cleveland Peace Officers Memorial Pipe Band who had thirty players committed and no one to teach them. This group quickly became the largest pipe band in Ohio with more than sixty pipers. It was this group who organized the Cleveland International Tattoo which saw pipe bands come from across the United States and Canada to participate. The Tattoo continues to this day. 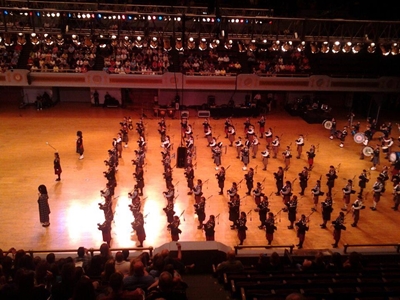 In 1998, a group of members of the Greater Cleveland Peace Officers Memorial Pipe Band wanted to test their hand at competing. At this time, the Red Hackle Pipes and Drums was formed. Sandy continues his involvement in this group to this day. 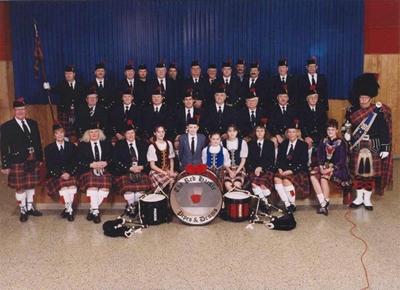 An avid composer, Sandy has had a number of tunes published. A few of his compositions are included in the recently published Black Watch Pipe Manual which is limited to tunes written by current and former Black Watch members for Black Watch members. The Manual includes seven of his compositions including: Donald McKillop, a popular jig Sandy wrote in 1951 for a member of the Royal British Legion in Scotland. It is sometimes erroneously referred to as Duncan McKillop; The Heroes of The Hook, written after a 1952 battle by the 1st Battalion Black Watch in 1952, Korea; Lieutenant Colonel B C Bradford, a famous Colonel in the Black Watch 1st Battalion; Major General A L Watson CB; Lieutenant Colonel Freddie Burnaby-Atkins; Freuchies March to Lords; and Farewell to the Black Watch, a piobaireachd composed following the absorption of the Black Watch into the Royal Regiment of Scotland in 2006.

As with many parts of this country, those in Northeast Ohio owe the generation before us a great debt of gratitude for passing along the passion of the bagpipes to us the effects of which will be felt for many years to come.