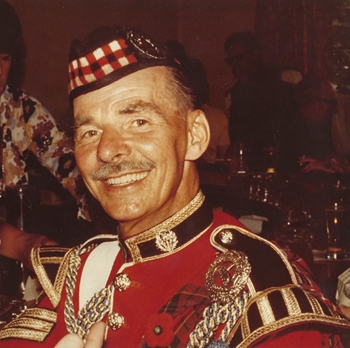 View this article as it appeared in the fall, 2017 EUSPBA Voice

Like a lot of cities, Cleveland’s pipe band landscape was greatly influenced by mostly Scottish immigrants who came to this country for a new life but kept a deep love of the music for their homeland. In Cleveland, no one had greater influence in pipe band drumming than Fred Sangster.

Fred William Sangster was born in Edinburgh in 1905. His love of music developed early. By the time he was eight, he was already studying drums, clarinet and bugle. When he turned fourteen, he joined the Queens Own Cameron Highlanders. Fred rose to the rank of Corporal Drummer and served with the “Cameron’s” in Queenstown in Ireland during the Irish War of Independence. The battalion engaged in several fire-fights with the Irish Republican Army. Fred also served in Germany, Southern England, Spain, France and on the island of Shamock in the Mediterranean. 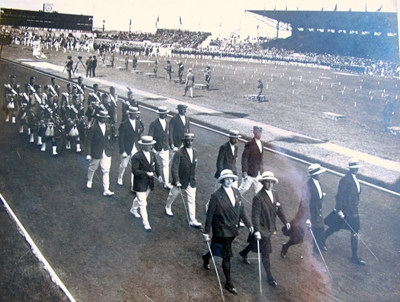 One notable event Fred attended with the Cameron’s was the 1924 Olympics held at the Stade de Colombes, Paris, France. As depicted in the movie, Chariot’s of Fire, the Cameron’s were positioned in the infield while Scottish runner Eric Liddell, “The Flying Scotsman”, won a Gold Medal for Great Britain in the 400 meter race after withdrawing from the 100 meter race as the qualifying rounds were on Sunday.

Due to the Depression, the highland regiments were forced to cut back. Fred was given the option of enlisting for another eleven years or leave so, in 1929, Fred left his beloved Cameron Highlanders and move to the United States.

Fred first worked for the Interlake Steamship Co. working on lake freighters. Because he was usually travelling the Great Lakes, he was not active in pipe bands. While docked in Cleveland, Fred heard the Cleveland Kilty Band performing and got the itch to start playing. He took a job with the Cuyahoga Metropolitan Authority, a job he would later retire from in 1975, and began performing with the Cleveland Kiltie Band which had formed in 1923 by a group of immigrant Scots working at the Fisher Body Plant. They were the only pipe band in Cleveland at the time and were associated with the Masonic Order and played at their functions as all members were also members of the Masons.

In 1957, as drumming instructor, Fred traveled to Iona College in New Rochelle, N.Y. with the St. Patrick Church Shamrock Pipe Band of Cleveland, to compete at and event sponsored by the Council of Gaelic Societies where it won first place, Irish Pipe Bands. 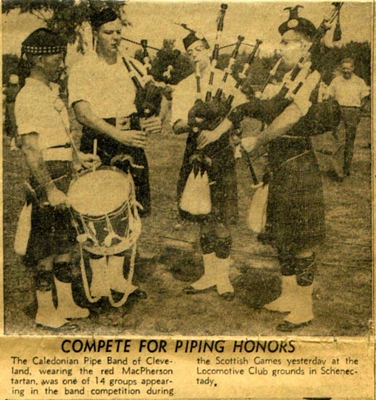 In 1958, the Cleveland Caledonain Pipe Band, under P/M Jack Thompson, finished first at the Hamilton, Ontario Games where Fred’s drum corps also finished first. Over Labor Day weekend in that same year, the band traveled to the Schenectady Games where the band finished second to the Boston Caledonian Pipe Band. After the games, the players from Boston convinced the band to travel to Brookline, Massachusetts to compete in the games held on Labor Day. Again, the band placed second to Boston Caledonain Pipe Band. Because not all players could make the trip, Fred played bass drum and was awarded the “Best Bass Drum” award in the contest. 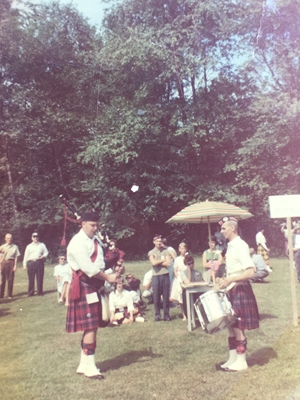 Fred Sangster competing at the Scottish Picnic at Euclid Beach Park in the late 1950's. The Piper is Noel Slagle.

In 1959, under P/M Noel Slagle, the band again traveled to the Hamilton, Ontario Games and again finished first. 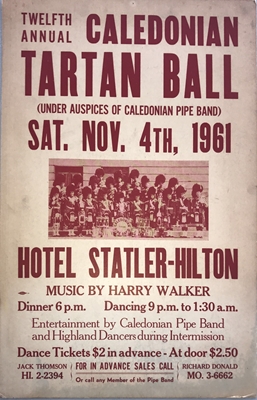 The 1960’s was a period where the Caledonain Pipe Band did not compete. Instead, the band performed locally especially at their Tartan Ball, which was the largest pipe band event in the State of Ohio at that time. Fred and his Drum Section “stole the show” with the unique drum beats and flashy stick work. 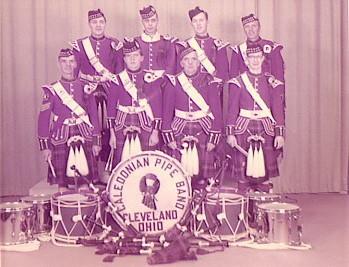 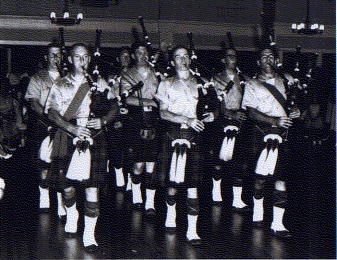 In 1977, the Cleveland Caledonian Pipe Band reentered the competition arena with Pipe Major Bob Sloan, now with the Atlanta Pipe Band, with Fred as Drum Sergeant. The band won first place at the inaugural Ohio Scottish Games as well at the Ligonier Highland Games. The band also traveled to the Canadian National Exhibition (CNE) in Toronto, Canada to participate in the parade of pipe bands and to enter the pipe band competition. At the time, Fred was the only person to have held the drum sergeant position for the band. Fred retired from active playing in the early 1980’s. 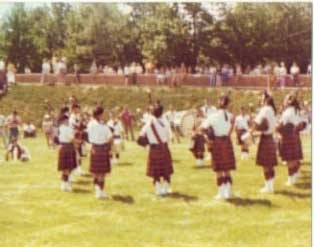 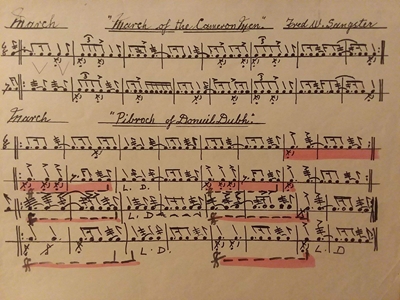 A lover of all things “drumming”, Fred would frequently correspond with pipe band drumming great Jimmy Catherwood to exchange ideas and drum scores. Jimmy Catherwood, of Dalzell Highland and Edinburgh City Police Pipe Band fame, was instrumental in the founding of the Scottish Pipe Band Association which later became the Royal Scottish Pipe Band Association. Fred also corresponded with other drumming greats such as Gordon Jelly, Alex Duthart and John Kirkwood. Fred was not limited to pipe band drumming and also corresponded with Gene Krupa, drummer for the Benny Goodman Band, where they exchanged ideas and drum scores over many years. One such composition was a score Fred referred to as a “Spanish 3/8” that Gene later incorporated into his show.

Fred did not drive an automobile and always carried his drumsticks with him. He was well known for playing on the dashboard of whatever car he was in. No matter how long of a trip it was, Fred never stopped drumming.

A man of many talents, Fred was also an exceptional artist and woodcarver. He painted intricate designs on dozens of drums and was once featured on a cover of the Sunday Magazine of the Cleveland Plain Dealer. Fred also designed the Cleveland Caledonian Pipe Band Crest and carved and painted a bar in his basement to replicate a rope tension drum complete with ropes, tension adjustments and painted snare head. 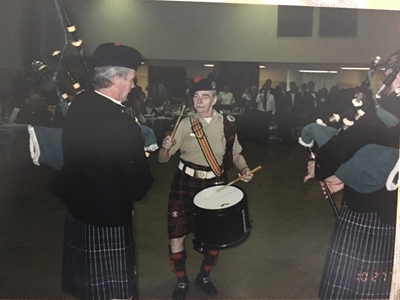 Fred passed away in 1992 at the age of 87 and is interned at the Brooklyn Heights Cemetery. Fred will always be missed by those who knew him but, will never be forgotten.

I would like to thank the many people who helped pull information together for this article including Ken Eller, Michael Crawley, Patty Slagle, Sandy Hain, Bob Sloan, Alec Murphy, Dick Finnigan, David (Van) Walters and Bruce Greig.